All Nations Enter the Kingdom of God – Fr. David 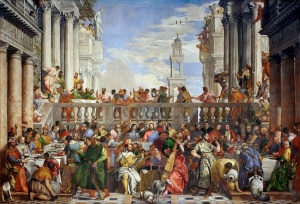 All Nations Enter the Kingdom of God

If we follow the order of Christ’s ministry as laid out by the gospel of Matthew, we see that Matthew has Jesus teaching His parables in two large chunks. The first group of parables takes place shortly after the Sermon on the Mount near the beginning of Jesus ministry and is directed toward the crowd of followers who began to flock to him. The content of these parables was primarily a description of what the kingdom of heaven was like: the kingdom of heaven is like a mustard seed or like yeast in a measure of dough. In other words, the kingdom of heaven grows slowly and imperceptibly, but it will end up being a very large kingdom. The crowds walked away from these parables pleased.

The second group of parables, on the other hand, takes place near the end of Jesus ministry, just before He was to make his last journey to Jerusalem in which he would be crucified and then rise again. These parables were directed not to the crowds but to the Pharisees, Sadducees and elders of the people, and the content of these parables was less about what the kingdom of heaven is like but rather who gets to go there. For the last five weeks in the church we have been listening to these parables and today’s was the last one. Last week we had the parable of the vineyard owner who rents his vineyard out to bad tenants. The week before we had the slaves who were hired to work in the fields, some at the beginning of the day, some in the middle, and some at the end. And the week before that we had the parable of the two sons who were asked to work in their Fathers field, one went, the other did not. All of these parables centre around the question, who gets to enter this new kingdom of heaven that Jesus is preaching about.

Today’s parable follows the same question. It compares the kingdom of heaven to a wedding banquet, and when everything is prepared the guests are called, but everyone is too busy to show up. Luke provides more detail than Matthew, he tells us why they were too busy. One person had just bout a field, and needed to see it, another just bout some oxen and needed to test them. They were all too busy with the cares of the world to celebrate the wedding banquet of the king’s son. Matthew’s account is a little more dramatic. He has these same people mistreating the salves and killing them. This echoes the events of the parable last week where the tenants who were renting out the masters vineyard killed the slaves that were sent to them to collect the master’s share of the harvest. And just like last week, the king in the parable today responds by destroying those people and then inviting others to the banquet.

Who were these ones who were too busy to celebrate with the king, and so violent that they mistreated and killed his slaves? Well, remember Jesus is talking to the chief priests, the scribes, Pharisees, and elders of the people. These people represented the kingdom of Israel, the chosen people, who had been in fact called first by God when he called Abraham to follow him.

It was clear to the Jewish leaders that listened to Jesus, that he was talking about them. They had been invited to the banquet but did not respond, they had been asked to follow Jesus and said no, and so in the wedding banquet of the kingdom, they have been rejected. And as if this wasn’t bad enough, others have been invited in their stead. The gospel tells us that the king went on to invite anyone, good or bad to the wedding banquet. Jesus is revealing to the Jewish leaders that God is no longer just considering the nation of Israel as his privileged people, he now invites all people into his kingdom, Jew and Greek, slave and free, women and man.

This would have been heresy to the Jewish leaders, the thought that non-Jews would receive a favored place in the kingdom of God was unthinkable. But if they simply looked at their own scriptures they would have found it.

Our first reading from the prophet Isaiah says, “on this mountain the lord of hosts will make for all peoples a feast of rich food, a feast of well aged wines.” When Isaiah uses the word “nations” he is not just referring to the Jewish nation, but all. Isaiah gives a foretaste of what Jesus will fully reveal, that the kingdom of heaven is for everyone who responds to God’s call.

But what does that have to do with us?  Well . . . Everything. My ancestry is German and while God was teaching his chosen people of Israel how to worship him, my people were in the Black Forest hunting wild beasts, pillaging villages, and making sacrifices to the countless local gods of the land. My ancestors were the people that Israel was instructed to stay away from. But the fact that today I am able to worship the same God as Israel, to be a member of the same kingdom, is only thanks to the fact that God’s election, while starting with Israel, grew to all who answer the call to follow his Son. And, unless you have Jewish ancestry, you are in the same boat as me. We should look at this parable and rejoice for if Jesus had not opened the Kingdom to all nations, we would still be lost in our sins.

We who have grown up in Canada, where all nations live together, in the Catholic Church, where all peoples are invited, (the word catholic means universal after all), I think we take it for granted that all peoples are welcome to enter the kingdom of God. But I think we would give greater thanks to God if we reflected upon the fact that this was not always so. In the beginning all were not welcome, non-jews were considered lost souls, but thanks to the sacrifice of Jesus Christ, you and I can be saved, and enter into the wedding banquet of the Kingdom of God. Today let us reflect on this, and the give thanks. 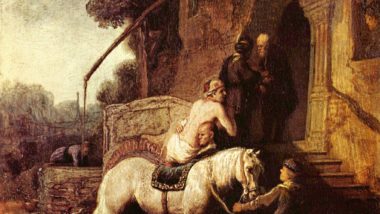