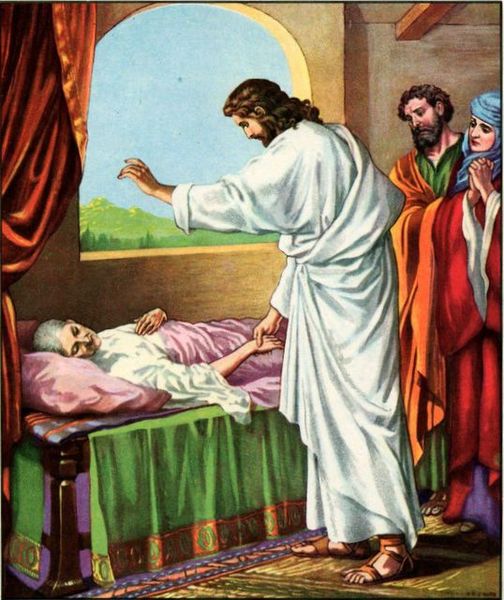 Have you ever noticed that whenever you get sick, it doesn’t matter how many good things have happened to you immediately before then, you still feel miserable? Think of a man who just won the lottery; he is ecstatic, jumps for joy, and invites his friends out for a big feast. But if only a few days later he gets the flu, goes to the hospital, and has to remain sick in bed for a week, no matter how many time he is reminded that he is a billionaire, he won’t cheer up until the sickness is gone.

Illness can sometimes put blinders on us, and we can see nothing good except that distant future when we will be better.

Well, imagine how blind and miserable the town of Capernaum must have been when Jesus arrived there. In our Gospel, it says that after Jesus healed Simon’s mother in law, word began to spread about him, and at sunset, “they brought to Jesus all who were sick and possessed by demons and the whole city was gathered around his door” (Mk 1:33). The whole city was there, the whole city wanted to see Jesus.

Imagine if everyone in Hamilton came to this church. Every street would be empty for miles, no cars, no pedestrians. There would be an eerie quiet everywhere, except in one place.

Though Capernaum is smaller than Hamilton the idea is the same. Capernaum would have been a ghost town because everyone was at one house. And what did they want, they wanted healing. Some of them wanted healing for themselves, they had been sick or possessed for years and now they found someone to bring them out of their misery.

Others wanted healing for their loved ones, they had brought their family member or friend who had been sick. This shows that the entire town of Capernaum felt the effects of sickness, everyone, old and young, was oppressed by the misery that it brings. But now they had hope, they now had a man who could bring healing and with healing came the possibility of experience the joy of life again.

So all of Capernaum was happy to have Jesus with them, but the day after all these healings something odd happens. Early in the morning, Jesus rises before anyone else, and simply leaves. He walks out of the city and doesn’t turn back.

Was his job done? Had he healed everyone in the city? It’s possible but unlikely. And even if he had, what if sickness comes back as it always does? How could he just leave these people after he had done so much good for them? I think that this odd action of Jesus reveals that, while he did bring healing to Capernaum – a great gift –he brought something even greater, something that would remain even after he left them.

This week I have been visiting with our grade schools, and frequently they asked the question, “Father, what happens to us when we die?” I then tell them that when we die our soul leaves our body. Our body stays here on earth, and then I ask them, “and where does our soul go?” Invariably the hands shoot up and they all have the same answer, “Heaven”. I say, “You are right.” But then I pause, look at them and say, “or”. It’s beautiful at that moment to see little minds at work. Then a brave hand appears in the air and says, “Father, there is another place  . . . but my mom doesn’t let me say that word”.

I tell you this because it reminds us that at the end of our lives, only one part of us lives on. In the end our bodies remain here, while our souls move forward. And on that day, what will matter most will not be the health of the body, but of the soul.

That is why Jesus leaves Capernaum. He didn’t come to just heal the body, he came to heal much more. Jesus says it himself. After Simon catches up with Jesus outside of the city, he tells Jesus, “Everyone is looking for you” (Mk 1:37). And Jesus responds, “Let us go on to the neighbouring towns, so that I may proclaim the message their also, for that is what I came out to do.” Jesus mission is to spread a message. He has a word to proclaim and he will not rest until it has been spoken to all the villages.

The message he speaks is not one of bodily health. He doesn’t say, “Those who believe in me will feel well.” Rather he says, “Those who believes in me will have eternal life” (John 6:47). Capernaum received this message. Jesus taught it to them in their synagogue. Jesus then healed people so that those in the city would believe his message. But it was now time for Jesus to move on.

In the weeks and months following Jesus visit to Capernaum, people likely fell ill again. The bodily health that Jesus brought could only last for a time, but the message they had received, the message of salvation, that would remain in Capernaum forever, and to those who believed, for eternity.

The experience of the people in Capernaum provides us with an opportunity to reflect upon our relationship with Jesus. All of us can probably point to moments in our life when Jesus had worked miracles, where he had brought peace and healing, maybe in a friendship, maybe in a family. Maybe we prayed for something we needed, a job, an acceptance into university, an acceptance into a nursing home, and Jesus answered our prayers.

All of the gifts of Jesus are opportunities to rejoice and give thanks, but does it lead us into a deeper relationship with Christ. Does his benefits to us in this world encourage us to listen to his message and follow his teachings more closely? Or do we only get hungry for more blessings.

As those school I visited children understood, all the good things that happen to us in this life mean nothing if they don’t prepare our souls for the next. So let’s accept Gods blessings with gratitude, but let’s make sure they lead us ever greater conversion. 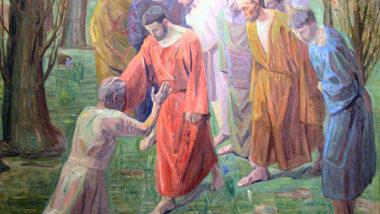 Am I Healing Or Hurting? – Fr. Mark