seeing with the eyes of Christ

Seeing With The Eyes Of Christ

When I was working at Dofasco, we had injuries to employees, and we had to perform accident investigations.

It was always interesting to me that we would have to interview 3-4 employees with different viewpoints and many times look at videos in order to truly get to the root cause, to get to the truth of what happened.

People would see some of the situation and would “fill in the blanks” with assumptions on the what they thought happened.

Trying to find the real truth and then putting things in place to prevent reoccurrence was a lot of work.

I was reminded of this during the past week by the gospel today with the crucifixion of Christ and the many different views that take place.

Let’s put ourselves at Golgotha and think what is happening and how people see it.

We have the leaders we are told “thumbing their noses” at Jesus and making fun of him saying “save yourself if you are the chosen one”.

We have the soldiers taunting and mocking him telling him to come down “if you are the King of the Jews”.

We have the first criminal harassing him saving “are you not the Christ?” – basically telling him to “prove it to me!”

All of them are making fun of him by calling him the names of the Saviour from the Old Testament – the chosen one, the Christ of God, the King of the Jews, – all of his royal names.

None of these witnesses to Christ on the cross can see the truth – they only see another criminal on a cross, a person who is destined to die that day and in a sense a failure.  They cannot see the truth that is right in front of them.

However, we know that one person could see with his heart, one person sees the facts, the reality and the truth of what is really happening – the second thief, the repentant thief – St. Dismas as he has been named historically.

He cries out to everyone there – “Have you no fear of God; this man has done nothing criminal” and he then turns to Christ and says: “Jesus, remember me when you come into your kingdom.”

He calls Jesus by his name as a close friend, he asks for mercy and love knowing his own guilt and sin.

Jesus replies to him, “today you will be with me in Paradise.” – Jesus says essentially – you are forgiven, your heart is true, and you recognize the truth that God loves you unconditionally.

Not many people during Jesus’ last hours saw the truth, but some did.

Remember the conversation with Pilate?

Are you a king? And Jesus replies “I am, for this I came into the world to testify to the truth.”

Pilate says, “What is truth?”

And Pilate through this recognized who Jesus truly was insisting that the inscription read: “the King of the Jews”

One could have asked Pilate “what did you see” and he probably would have answered “a King”.

What did you see? What do you see?

We ask the same things these days, don’t we?

Reality television is not real, news has become hard to figure out with so many websites telling us things that aren’t true – the facts are blurred!

Algorithms from internet companies force us subliminally into a narrower and narrower view of the world as if feeds us only what we like and nothing that may cause us to pause and think.

Netflix tells me things I might want to watch because of what is on “My List” and is just telling us to watch more and more of the same thing all the time.

How do we see with the eyes of Christ?  What we have to do is to ponder “what and how did he see?” and we can do this from the examples in the Bible.

For instance, people saw Zaccheus the tax collector and his outward greed.  However, Jesus saw Zaccheus’ heart – one who wanted conversion and eventually repented and paid back 4X what he stole.

People saw the lepers at the time and shunned them, abused them and sent them far away.

But Jesus saw the lepers as people who wanted to be a part of society, to be touched and to be loved and treated them in this way.

People saw the women caught in adultery and wanted to stone her and treat her as a social outcast and evil.  But Jesus saw a woman who wanted a second chance at a new life, to go on with life and “sin no more”.

Christ is our example of how we should be seeing the world each day and it is truly a challenge for myself and all of us.

Pope Francis has renewed this same message telling us to take on the “smell of the sheep” and to “go to the peripheries” to help the poorest of the poor and those most in need.

A great example to me lately has been a nun, Sister Mary Peter, in India who I met six months ago.  She helps the poorest of the poor in a small rural town called Rajgangpur.

In India they still have the caste or class system especially in the rural areas.  And the lowest caste is called the Dalit, or Untouchables.  They are the ones who clean the streets, clean out the sewage system or animal waste from the streets.

They have nothing and their children have the same, with the expectation to fulfill the same role as their parents did.

She has gone to the peripheries and lives beside them, walks their streets, eats with the families and now educates their children with her fellow nuns.  Some of the kids have gone on to become nurses, teachers and lawyers and break the cycle of poverty.

It is truly inspirational to watch her at 70 years old and 50 years as a nun to have Christ give her the energy and love to walk with these people in their truth.

So, what can we do?  How can we see with the eyes of Christ?  I would say three things.

First, we need to follow the psalm today and “go to the house of the Lord” and read verses from the four gospels to see how Christ gave us an example to live.

It means to volunteer somewhere in our community that puts you close to those most in need – the sick at the hospital, the shut-ins and lonely in our nursing homes or their own homes, the poor at the Good Shepherd or our Ministry in Need or St. Vincent de Paul group.

It is not always easy, but I will tell you it is so rewarding as many times they help us to learn to love and share and care more than anything that we can give them.

And third, in our own families, the “domestic church”, let us learn to judge less and love more.  Let us forgive each other of the hurts and wounds of the past, and instead bring the joy of the daily “kingdom of God” to each day that we can spend together.

So, this week, as the challenges of daily life, the stresses, the ups and downs of our lives come at us – let us stop, take a moment, and ask ourselves this one question: “What did we see?” 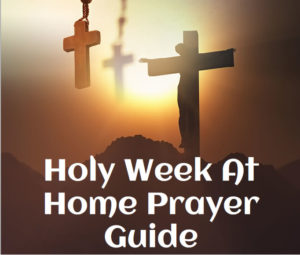 Just Click
& Select "Add to Home Screen"
We use cookies to ensure that we give you the best experience on our website. If you continue to use this site we will assume that you are happy with it.OkRead more