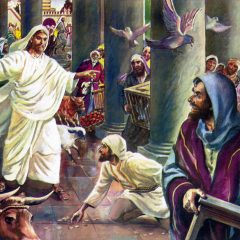 Cleansing Of The Temple – Fr. David 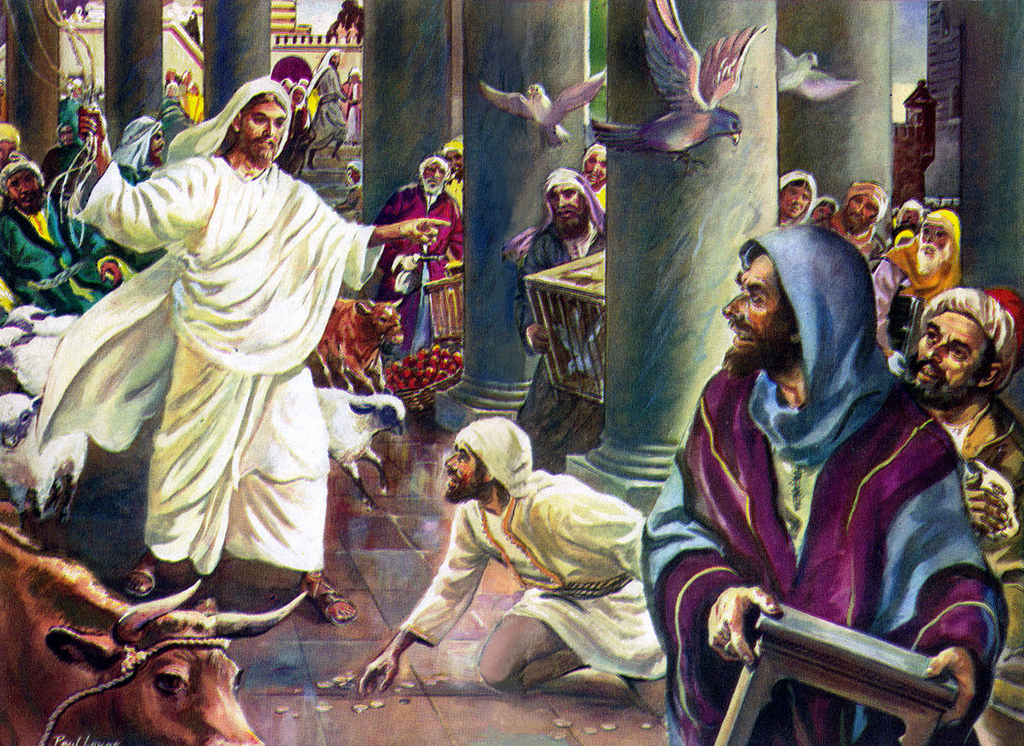 Third Sunday of Lent – Year B

When we read through the Gospels we encounter many images of Our Lord that are very attractive to us. Take for example the image of Our Lord sitting in a field of lush green grass surrounded by his followers as he multiplies bread and fish to feed the hungry crowd. Or how about the image of Our Lord sitting in a crowded room as a paralytic is lowered from the roof on a mat. He says, get up and walk. And he gets up and walks. These images, and many others, are attractive images of Our Lord. We like to think of them, tell them to our children, and present them as the hallmarks for our relationship with God. Our Lord is the one who heals me. Our Lord is the one who feeds me.

However, in the Gospels, we also encounter images of Our Lord that are less attractive, and can sometimes be unsettling. Today’s gospel is one example: Or Lord cleansing the Temple. He wields a rope and swings it at the animals to drive them out. He turns over the tables of money changers and dumps the coins on the ground; Our Lords is filled with righteous anger, driven by a zeal for His Father’s house. This is typically not an image we use to depict our relationship with Jesus. Can you imagine the image of Our Lord cleansing the Temple on the front door of this church with the words, “everyone welcome.”

No, this is not an image that attracts. We like the meek Jesus, we like the Jesus who feeds, who heals, and we find it difficult to accept the Jesus who cleanses the Temple.

But the trouble is, it’s true. It happened. And you know what, the disciples wanted us to know about it. The cleansing of the Temple is one of the few events that is told in all four Gospels. And that tells us that this is an important event that none of the Gospel writers wanted their readers to miss. But what could be so important about Jesus flipping tables in the Temple? To answer this question we need to go back to our first reading, to the time of Moses.

In our first reading we heard the account of God giving the Ten Commandments to Moses. God had just freed the Israelites from slavery, destroyed Pharaoh’s army, and now was making a covenant with his people. God chose the Israelites to be a nation different from all the rest. God then set before them the first commandment, to worship God alone and not have any other gods besides Him. This would be the first and most important commandment. To follow it was greatest thing that Israel could do and on the flip side, to break it was the worst.

Following this commandment would not be easy. All the nations around Israel had their own gods. They had gods for everything. A god for the sun, a god for the moon, a god for rain, and a god for harvest. These other gods became a temptation for Israel when the one true God wasn’t answering. Imagine a Jewish farmer praying for rain with no luck, maybe if he prays to a new god something will happen. While this happened often in the beginning, over a long history Israel grew in its faithfulness to the on true God.

What aided the Israelites in their faithfulness to God was the eventual construction of the Temple. It formed a single place where the one true God could be worshiped. One Temple, One God. It is hard to overstate the central importance the Temple plaid for the life of faith for the Jews. The Temple represented Israel’s faithfulness to the first and most important commandment. Any problem with the Temple then became a problem with the first commandment, and a huge problem for Israel.

This is where Jesus’ action of cleansing the Temple begins to make more sense. Our Lord had come to Jerusalem to celebrate the feast of Passover. As he approached the city from a distance he would have seen the Temple while still a far ways off, for it was a large structure. To any Israelite who saw the Temple, it would have reminded them of God’s protection for his people, and in turn the fidelity of his people to the one true God. We can imagine Our Lord’s shock then as he ascended the steps of the Temple, and rather than encountering a house of prayer, he encountered a market place.

Did Our Lord see a new god making its way into the Temple? The god of money? The buying and selling that went on in the Temple revealed clearly where the hearts of the Temple authorities lay. While they outwardly worshiped the God of Israel, the god of money had control of their hearts. They had committed the first and most grave sin of worshiping a false god.

Upon seeing this, Our Lord was given two options: he could let the sin continue and let the marketplace slowly become the new god of the Temple. Or he could set things right. He could take away the sin and restore the Temple to its original purity. For the Son of Man who came to take away the sins of the world it wasn’t really a choice. So he cleansed the Temple.

But to take away sins can sometimes be uncomfortable, especially for those who hold on to them. No doubt the money changers were grasping at their tables, trying to remain where they were. They were comfortable, they were getting rich, they didn’t want anything to change. The force with which they held onto their sin required Our Lord to use equal force to pry it away from them. He flipped tables and started stampedes. He had to make a mess before the Temple could be made clean. But when all was said and done, when the animals had been driven out and the coins had been picked up off the ground, the Temple had again become a house of prayer, a place of peace, a place to encounter the one true God.

The first commandment called Israel to worship God alone and they were failing in their most important duty. That’s why Jesus did what he did. But still, I think the image of Jesus holding a whip and driving out money changers can unsettle us, even if he had his reasons. I wonder if it’s because deep down inside we know our hearts identify with the marketplace more than the Temple.

St. Paul said that we are all Temples of the Holy Spirit. That means our hearts should be a place dedicated to one love above all others, the love of God. All other loves should flow from that first love and should never compete with it. But I think if we are honest, we can admit that our hearts are not always a Temple. We don’t always love God above all else, and a good amount of the time our hearts are a marketplace where all of our other loves are competing for our attentions, shouting like the money changers, drowning out the voice of God. Perhaps it’s wealth, or an over concern for money, when you are in fact doing all right. Maybe it’s material goods, online shopping or browsing. Mabey it’s a focus on our image, an unhealthy desire to be liked. Or maybe it’s just plain sloth, or gluttony or lust.

The human heart is complicated. It is full of many things. And that’s understandable. But if our hearts are to become Temples, focused on God above all else, then we need to let Jesus make a mess, we need to let him loose on the market within us, and force out all our false loves and attachments. The place he does this is in the confessional. We open our hearts and he make them clean. Maybe you haven’t been in a while, maybe you’re afraid of what will happen. Well, I can’t promise you it will be easy, good things in life rarely are, but I promise that in confession, God will put your hearts in order just as he did the Temple, and a peace will flow within you as the market is driven out. All that will remain is the quiet dwelling place of the one true God.